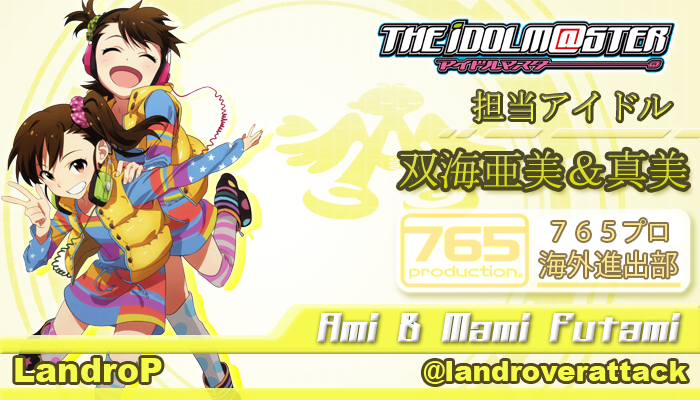 Niichang yolo yolo! Landro is one of the first P friends I ever made so I was pretty ecstatic to finally meet him in person at 9th for the first time when I did. Anime North 2015 with Asapon guesting was especially fun too since Landro is also a Futami twins P and it was pretty epic to see a Futami P’s reactions to meeting the real person. A lot of my fun memories in Akiba involve running around the arcades with Landro and he’s quite skilled at a lot of various games himself. Good taste in games, doujinshi, a good man who has done me more favors than I can count. I want to marry him one day.

1. How did you first learn about “The iDOLM@STER”? What were your first impressions?

I first read about arcade idolm@ster in an article on a certain niche gaming website. The article was written by someone who lived in Japan and played the game, and it was rather mixed sort of review. But I knew it was something I’d be into, having always loved raising sims, anime and Japanese music. I was able to play the game finally while visiting Japan in ’07 and I was right!

2. Have you played any of the idolm@ster games? Which is your favorite?

I have played them all, though admittedly I haven’t spent much time with DS or more than a few hundred in the arcade. My favorite is probably idolm@ster 360. It’s partly some nostalgia for 1st Vision designs but I also think it’s the most challenging and rewarding of the games. It’s much harder to cheese and takes strategy to do well. That’s just me talking as a gamer, though.

Close second is One For All for having Ami and Mami producable separately.

3. Which idol is your favorite and why?

Futami Ami and Mami. Together than have more energy than anyone else in the cast. Their songs and singing are just like them: upbeat and fun.

They are also very clever and intelligent I feel; even though there are a lot of things they don’t know due to their age, they are very sharp and quick to understand.

And they are super adorable and wear the cutest clothes.

Also on the Cinderella Girls side, I love Jougasaki Mika. Her flamboyant looks and mannerisms mask her inner awkwardness and innocence. It’s a very deadly combination. Also, her song is among my all-time favorites in the franchise.

4. What is your favorite idolm@ster song and why?

スタ→トスタ→ is my favorite. I really love the twins and I don’t think any song encapsulates them better than Start Star.

5. What’s your favorite aspect of the idolm@ster series?

The lives. Almost everything I love about the franchise comes together for the lives. The seiyuu, the songs, the outfits, and of course the amazing community. Even on Blu-ray we as producers can all bond over the lives. I think they are the #1 thing that bring us together. Those producers I’ve live’d are the ones with whom I have the deepest bonds.

6. When and how did you become a “Producer”? That is, when did you consider yourself an idolm@ster fan?

I really was not much aware of the im@s community, let alone “Producers” until 2013 when I met a certain BasuP. I’ve considered myself a fan ever since I played the arcade game in ’07 though. I didn’t have a lot of knowledge or opportunities to express it much, though. I didn’t own any of the games until imas 2 came out on PS3! But of course then I collected all the anime BDs with G4U…

7. Have you ever been to an idolm@ster live concert? Please share your experience or any particularly special memories if so.

I’ve gone to several, but my first was 8th Anniversary Yokohama. That was definitely special; you never forget your first. Finally hearing live all the songs I’d listened to for years was an amazing experience, and being able to share it with fellow producers before and after was truly important. My first Ippai Ippai…

8. Do you play any of the mobile game series such as Cinderella Girls and Million Live?

Yeah I play that mess. Deresute will be the end of me.

9. Did you watch the Cinderella Girls anime? What were your thoughts?

First of all, I think the original idolm@ster anime was an amazing adaptation. Looking back now I still marvel at how well put together it was. And most importantly, filled with love for the series.

CG was a much different beast, with no real stories from the game to draw on and a newer, less-developed cast. They built upon the characters they were given wonderfully. Though it kept close to some original animas story beats, it didn’t suffer because of it. It really made me love many of the characters more than ever.

Also thanks for all the Mika.

10. Do you have any favorite seiyuu related to the idolm@ster series?

Other than all of them, Asami Shimoda and Yoshimura Haruka. I find it a joy to see any one of the many im@s casts live, though.

11. Shout out your love about the idolm@ster series, say anything you’d like!

12. [From Robert] Since you are an English teacher in Japan, your English class consists of the 765Pro cast who are learning English to  prepare for their first North American concert. How would a typical day in your class go?

Something that happens sometimes is that students get really excited when I sign my name on something and everyone suddenly wants signatures from me. I think this class would be the opposite of that. But of course I would keep it professional… I don’t think I would be allowed to teach Asapon any dirty jokes in English though, unfortunately.

13. Say something about the next interviewed person (bbb), also please ask them a question.

When you first came in contact with im@s, were you a HarukaP at first sight? Or did you flirt with the other girls first? What was your process like?