Introducing YashaFox all the way from Poland. One of the nicest individuals I’ve been able to meet since becoming an im@s fan. YashaFox is not only a Producer for Takane but also Ranko. He’s also done a lot of work with translations into English especially with Cinderella Girls. Go Poland!

END_OF_DOCUMENT_TOKEN_TO_BE_REPLACED

Columbia just announced the details for the second batch of the M@STER ARTIST 3 series in addition to putting up samples of GOIN’!!! and 夕映えプレゼント on Youtube. A completely new song was also announced for the Taiko no Tatsujin x The iDOLM@STER collaboration. Details after the break.

END_OF_DOCUMENT_TOKEN_TO_BE_REPLACED

Bandai Namco and Lantis have blessed us with further information regarding the 9th Anniversary WE ARE M@STERPIECE Blu-ray Boxes as well as an 8.5 minute digest of the the Tokyo Day 1 performance (above).

END_OF_DOCUMENT_TOKEN_TO_BE_REPLACED

I’m sure you’ve heard the news by now but if you haven’t, Hasegawa Akiko aka Akky has just announced her pregnancy! So a gigantic full of onigiri happy birthday and congratulations to Akky! While she won’t be able to participate in upcoming work-related events, this is of course a wonderful announcement and we hope for Akky and her family to be blessed with a happy future. We love you Mikimiki! Onigiriha nano-! 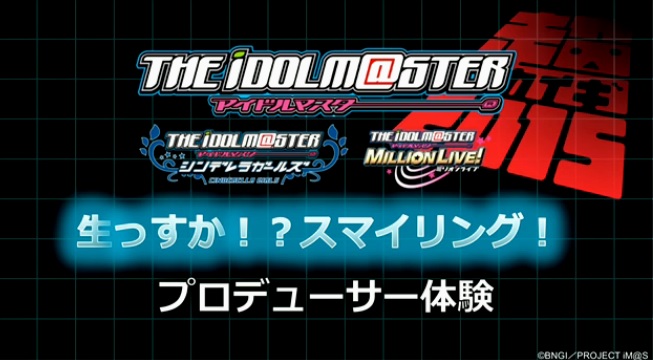 It’s April which means it’s almost Nico Nico Choukaigi!  What is Nico Nico Choukaigi? Think of it as Tokyo Game Show or Anime Contents Expo but all revolving around Nico Nico Douga meaning it’s also broadcasted on NND itself. If you’re interested in the event itself be sure to check out its official English page.

END_OF_DOCUMENT_TOKEN_TO_BE_REPLACED

There’s always the token boin lover in every group. Azusa Ps are an especially rare breed these days so I’m happy to have KenP around as the very first Azusa P from overseas I’ve met. Double Mt. Fuji!

END_OF_DOCUMENT_TOKEN_TO_BE_REPLACED

With the recent announcement revealing which performers will be appearing at which dates, it would probably be to your benefit to familiarize  or re-familiarize yourself with relevant songs and relevant colors. This way, you know what color cyalume to whip out at any given song…or at least have a good general idea. Now, songs in this cheat sheet are by no means guaranteed to make an appearance.

Anyway, the cheat sheet is here. We’ll be updating it as necessary.

Producers all over the country, it’s been a while.
I’m the general iDOLM@STER Producer Ishihara, AKA Dire1.
We announced the details for THE IDOLM@STER M@STERS OF IDOL WORLD!!2015″ today, and we’re going with “celebration” as a theme this time around.
This time we want to try and celebrate the 10th anniversary of the iDOLM@STER with everyone alongside the idols on stage.
In day 1, we want to celebrate with 765 Pro who is welcoming their 10th anniversary alongside the support members and all the producers in the venue.
In day 2, we want to celebrate The iDOLM@STER with 765 Pro members, Cinderella Girls members, Million Live members and of course all the producers in the venue.

Without much fanfare, the performers for the 10th anniversary were announced today. Dire-1 also posted a few words about the current lineup and the live (which we will try to post later).

END_OF_DOCUMENT_TOKEN_TO_BE_REPLACED

Continuing the previous article, we’ll cover more of the girls who will be appearing in ENJOY H@RMONY. A while back, during the Million Radio anniversary, Dire-1 (Ishihara Akihiro) said that they went all out again with the live this time, and so people can expect different setlist for each day.